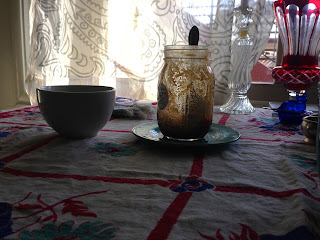 “Then I felt — and even saw in the waves — my energy body, which I believed to be my very being, move away from me and merge with the energy bodies — the very being — of the pigs. I felt, saw and knew in that instant that the pigs and I — despite our radical difference, our complete alterity — were interconnected, so deeply interconnected that we were one continuous being.”
––Bob Comis “’The pigs were glowing deep gold’: The amazing experience that ended my life as a pig famer”

A good friend of mine, let’s call her Brigita, spent a night in my guest room. The next morning, over a cup of hot tea in my kitchen, she told me of the dream she had while sleeping between my clean sheets.

In her dream, Brigita was in a room crowded with men. At one point she found herself leaning back on a bed. In another, she sat between two of them on a large sofa. “One,” she said blushing, “was quite handsome.” It seemed to me, however, she had enjoyed flirting with both. “I felt sure I would kiss at least one of them,” she admitted somewhat shyly. You see, Brigita was widowed several years ago and, as far as I know, rarely dated.

“But here’s where it gets strange,” she said, tapping my forearm with the pads of her fingertips, warm and wet from her steamy cup. “I was also aware of a presence bigger than anyone else in that room. Let’s say it was the voice of God joining me while I sat there waiting for one of the men to reach out.”

She addressed the God voice indignantly as if it was already criticizing her. “Well, Why shouldn't I kiss them? I mean, they’re here, so many of them, and I want to!”

The voice responded with silence, and in the very next moment, Brigita and the handsome one began necking, sitting side-by-side on the couch. His tongue in her mouth, hers in his, which, she told me, was just as pleasant as she recalled.

Then the pleasant sensations became distorted. First, she noticed an odd and smoky taste. “A very meaty flavor,” she said, “which could only originate from his mouth. Yet, as unpleasant as it was, all I cared about was whether or not he enjoyed my kisses. Am I pleasing him? Do I still have the proper technique? I wondered” The more she wondered, the odder the taste until it became intolerable. She pushed him away and stood some distance from where the men in the room clustered and chatted.

But the unpleasant taste grew stronger still. “Actually, it became even more disgusting!” she said. “Gritty strands of meat clung to my teeth. I tried spitting them out, but no matter how much I spat, there were always more.” She discovered a chunk of salami under her tongue, little slices of pepperoni stored in her cheeks. To her growing alarm, as soon as she expelled one meaty chunk, another appeared. Sausages she’d unknowingly been storing in the back corners of her mouth for years made their way to the tip of her tongue.

She grew nauseous, and it seemed to her the room of men began to spin. “What's going on?” Brigita called out to God. The answer came to her as clear as a bell, “I am purifying you.”

She put her cup to lips and studied my face across its rim. “You see,” she told me. “I now understand our bodies are energy. When we kiss someone or have sexual relations there’s a karmic exchange.”

I must have looked upon her skeptically because she arched her own eyebrow in response.

Silently, I began doing my own calculations. With whom and how many have I shared a bed? I sipped tea in some urgency, for the power of suggestion had implanted a smoky taste across my own tongue.

“I’m not judging you,” she insisted. “It’s mathematical truth.”

She returned to what she had seen in her dream. Some of the men began fornicating with each other, and some with women who had appeared from nowhere naked and open-legged. “There were golden lines of energy winding through and away from each body,” she said, which entangled with one another like loose threads unwinding from multiple balls of yarn. “There was something beautiful about it, yes, but also inescapable. When I think of the men I’ve been with. All the purifying I must now endure!”

“But Brigita,” I said, “you live the life of a nun!” You see, she had been blameless in her husband’s death. Throughout his long illness his family had sometimes called her a saint.

She sighed. “You don’t understand. Before I was married. Well, after too––” She drank again from her cup. Her gaze softening, she looked past me and into the other room. “The thing is, I noticed God wasn’t purifying anyone on my behalf. No one else was being prepared. I had attitude about that! Why no man for me? I called out. But, no, God was quite firm. I am the one in need of purification! That much was clear.”

I swirled a bit of tea across my tongue. I put the cup down and added more honey, using Brigita’s spoon. I looked across the table at my friend, sitting in her nightgown, with uncombed hair. There was nothing more beautiful to me than this woman whose face was plumper than in our youth, holding her cup with brown and wrinkled hands, looking upon me with sweet and glittering eyes.

How pure was it possible for one woman to become, and how can anyone ever argue with a dream?

Posted by Kimberly Jean Smith at 10:36 AM

Kimberly Jean Smith
I blog to explore the dilemmas and delights of writing, teaching, learning, and tango.